A Queer and Pleasant Danger: A Memoir

Kate Bornstein,Alice Rosengard,Audible Studios Oct 19, 2021 Kate Bornstein,Alice Rosengard,Audible Studios
The True Story of a Nice Jewish Boy Who Joins the Church of Scientology and Leaves Twelve Years Later to Become the Lovely Lady She Is Today A stunningly original memoir of a nice Jewish boy who joined the Church of Scientology and left 12 years later, ultimately transitioning to a woman. A few years later, she stopped calling herself a woman and became famous as a gender outlaw. Kate Bornstein - gender theorist, performance artist, author - is set to change lives with her compelling memoir. Wickedly funny and disarmingly honest, this is Bornstein's most intimate book yet, encompassing her early childhood and adolescence, college at Brown, a life in the theater, three marriages and fatherhood, the Scientology hierarchy, transsexual life, LGBTQ politics, and life on the road as a sought-after speaker. 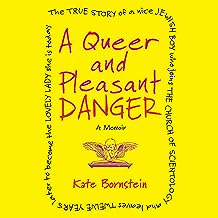 Book Title: A Queer and Pleasant Danger: A Memoir